I posted the image (below) of Oculus at World Trade Center, New York last night on Facebook as a Facebook 360° image and a lot of people asked how I managed to get it to appear on Facebook as a 360° image that you can scroll around or even tilt and turn your phone/tablet to view. Take a look at the Facebook post HERE

Here’s the step by step process of what I did to achieve the 360° image (please note – I am new to this process also so haven’t tried it with many images). 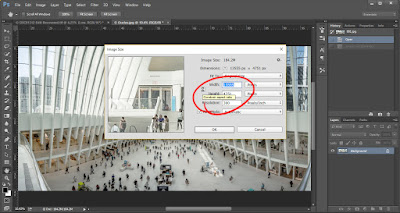 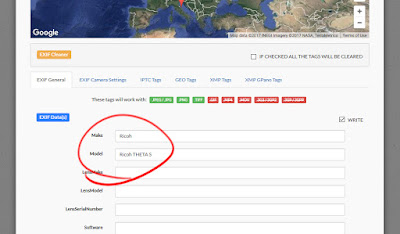 Thanks for reading. I hope that the process works out for you and you manage to create some cool content with this.

Don't forget to follow me on my social media channels:

Following on from their recent foray into auto focus lenses last year with the AF 50mm f1.4 (reviewed HERE) and the AF 14mm f2.8 (review HERE), Samyang are now launching their AF 35mm f2.8 for Sony FE mount.
This new lens from Samyang will fit nicely into their existing lens line-up with the main emphasis being made on size and affordability but no doubt will be compared to the Sony FE 35mm f2.8 ZA and even more expensive, faster options such as the Sony FE 35mm f1.4 ZA or the Sigma 35mm f1.4 ART (via an additional adapter).

A 35mm lens is a focal length most like the field of vision of a human eye (63.1° on full frame, 42.9° or 52.5mm on APS-C) so it's no surprise that it is a very popular lens amongst a wide array of photographers including photojournalists and street photographers.

The design of this lens is very similar to the other Samyang AF lenses. This lens is very small in comparison to both the 50mm and the 14mm and very light weight (only weighing in at approximately 83g without lens caps). The only difference is that the 35mm appears to be made of high quality plastics as opposed to the 14mm and the 50mm being made mainly of a more solid and substantial metal alloy. The lens construction is made up of 7 elements in 6 groups, 2 of which are aspherical and 1 high refractive plus Ultra Multi Coating to reduce aberration. It has a minimum focusing distance of 35cm, a filter thread diameter of 49mm and an aperture range from f2.8 up to f22. The lens will be made available worldwide during July with suggested retail price of €299.


Autofocus performance again seems very much like the AF 50mm - very quick and precise. I've read a few complaints over the noise of the AF system in the 50mm f1.4 which to be honest I've never really had an issue with or even noticed when I'm concentrating on getting the right shot but those complaints are possibly coming from people that use the lens for video. Having said that it's still always possible to use manual focus with the lens to negate any noise from the AF motor during filming. Although I've found the AF to be quite fast, accurate and responsive while mounted on my A7R, I have no doubt that speed of focus will be a lot quicker when mounted on other A7 series cameras such as the A7II, A7RII or A7SII due to those cameras featuring the vastly superior phase detection autofocus system as opposed to the contrast autofocus found within the A7R. 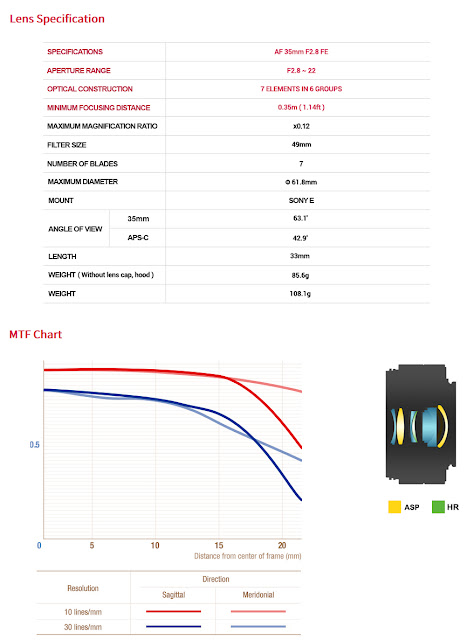 The small and lightweight form factor of this lens make it an ideal partner for either the Sony A7 series cameras, the slightly larger, brand new Sony A9 or even the APS-C sensor A6000/A5000 series cameras. Mounted on any of these cameras it makes for a very compact and portable camera and lens combo. Something which can be carried pretty much anywhere with you so that you have a powerful imaging device at your fingertips at all times. This is a setup that I have wanted for a long time and I thoroughly enjoyed carrying it around on my recent New York trip as the majority of my lenses and equipment are quite sizeable so I'm less likely to carry around with me on a daily basis.


Looking at the test images that I've shot below it's easy to see that this lens performs well to lock on focus with good colour reproduction. The lens does suffer a little from barrel distortion which is evident in the picture of the stone columns taken at St George’s Hall in Liverpool. However, this may well be down to the optics in the pre-production lens that I was given to test but is nevertheless easily corrected in Lightroom or Photoshop. The sharpness and overall image quality of this lens is pretty good but not on par with the other Samyang AF lens that I’ve tested (50mm f1.4). However, the AF 50mm f1.4 is very much a more substantial lens in terms of size and with that the construction contains more optical components therefore the images differ in quality. There is very much a gap in the market right now for a more affordable line of full-frame, autofocus lenses for the Sony A7/A9 series FE mount cameras. Samyang has spotted this and are taking full advantage while producing great value lenses that perform well whereas other third party lens manufacturers are left falling by the wayside.

All test images were taken with my Sony A7R.