Samyang have kind of surprised me a little with this one. Their recent roster of released lenses reads with an impressive array of AF lenses and high performance, manual focus XP lenses all for full frame cameras but on this occasion it’s a manual focus lens for APS-C (cropped sensor) cameras. I would have bet good money that following on from the recent release of the Canon mount AF 85mm f1.4 EF that Samyang would then bring out a similar lens for Sony E-mount with the additional extension to make up the flange distance lost due to the lack of a mirror in mirrorless cameras. I was wrong!

Recently announced with the tagline "Create New Possibilites - Everything from portrait to street photography" this brand new Samyang 85mm f1.8 will find a gap in the market as there isn’t any competition for fast aperture (cropped sensor only) 85mm lenses. There are plenty of full frame options (which still work on APS-C camera bodies) out there such as Sony’s 85mm f1.4 Gmaster lens (£1649), Zeiss Batis 85mm f1.8 (£935) or Sony’s 85mm f1.8 (£599). However, the first two of these lenses (Gmaster and the Batis) are very pricey. This Samyang lens will be released at a SRP of £319.99 which will appeal to Sony APS-C shooters as this is relatively inexpensive compared to it's competition. Samyang achieves this by leaving out features like autofocus, weather sealing and full frame capability but as a result the lens remains quite compact for a lens of this focal length and aperture.

The fairly compact lens is made up of 9 elements in 7 groups including one High Refractive Index element and one Extra Low Dispersion element. All elements have Samyang's UMC (Ultra Multi Coating) which helps reduce chromatic aberration and flare. It features a 9-bladed manual diaphragm so the aperture is not recorded in the EXIF of each image, something which made remembering the settings for each test shot that I took pretty difficult. It has a minimum focus distance of 0.65m, a magnification ratio of x0.17 and weighs in at 344g for the Sony e-mount version. It has a 62mm thread for the use of filters and comes with a plastic lens hood. An 85mm lens on a Sony cropped sensor gives a real world/35mm equivalent focal length of 127.5mm or 19.1° so is ideally suited to portrait photography. This lens is also available for the following mounts: Fujifilm X, Canon M and MFT. 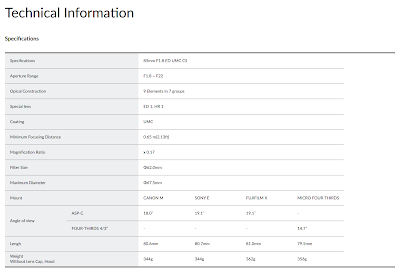 Build quality of the lens is very good and it features a metal lens mount. The focus ring is smooth with a lot of travel so you can really nail the focus. The manual aperture ring moves with pleasing half a stop clicks. I was very surprised by the sharpness and detail that this lens is capable of capturing even though I had to use my camera in crop mode so as a result lost quite a lot of megapixels. I'd imagine that this lens would work great on a dedicated APS-C camera like the A6500 which has 24.2 megapixels so you'd see even more detail and have the ability to crop in more if needed. The bokeh produced by this lens is beautiful and due to the relatively wide aperture and long focal distance you can really isolate your subject from the foreground/background.


This lens can be a little tricky to use due to it's reasonably long focal distance and lack of autofocus so it makes shooting some subjects very difficult especially things in motion. In my case with some of the sample images that I've shot I've had to judge where some points of focus were going to be before capturing the image with perfect timing (see punchbag image where you can even see drops of sweat coming off the fighter as he throws the punch).

As usual I've kept the waffle to a minimum so as to let the images speak for the lens's capabilities. The only e-mount camera that I own is the Sony A7R so as a result all images have been shot in the camera's Crop/APS-C mode. This brings the resolution of the images down quite a bit but is still a very respectable 15.3 megapixels. Check out the images below.

Check out my reviews for some of the other Samyang lenses for Sony E-mount below:


I'd like to thank Alice and all involved at Samyang Korea for sending the lens out to me for testing.

Special thanks to Gary at Forge Fitness & Boxing for giving me access to shoot at the gym and also to Cage Warriors Middleweight fighter Lee Chadwick for starring in the action shots.