Last week I had an email from Samyang in South Korea explaining that they had just sent out their new 14mm f2.4 XP sample lens to me via express courier direct from South Korea. The email went on to explain that this was the only sample lens in existence to create content globally. A HUGE deal. I was so thrilled and honoured to be able to get my hands on this lens before pretty much anyone. I was fortunate enough to receive one of the 1st AF 50mm f1.4 lenses in the UK again direct from Samyang themselves for testing and reviewing only a few months ago (review of this lens HERE) so to follow up with another high profile and much anticipated lens was great news for me.

Overview of the lens

Having recently looked into the options available to me as a Sony shooter for ultra-wide lenses I think that I know the market pretty well. I wrote a blog post a few months ago (give it a read HERE) where I looked at a few different options in my search for a full frame ultra-wide angle lens. In the end I went with the stellar Canon 16-35mm F4L IS USM. A decision that has definitely paid off for me as the images that the lens produces are superb with sharpness throughout the frame and not just in the centre of the image. Enough of my waffle about the Canon lens. This review is about the new Samyang. Samyang is renowned for making great lenses at an affordable price and so a lot of photographers find that these lenses are a very accessible option. Samyang has quite a few options that would be classed as ultra-wide lenses and in fact have recently added to their line-up with the launch of their new 14mm AF f2.8 lens which has been received really well by photographers worldwide. The older 14mm f2.8 (manual) focus is also very well thought of lens with many a landscape photographer. So, they have a manual 14mm f2.8 and an autofocusing 14mm f2.8 and now they've introduced the 14mm f2.4 which will allow half an f-stop of extra light into the camera. This can then allow for lower ISO or faster shutter speeds in low light situations.


Lens design and specs
The lens has been designed very differently to how the rest of Samyang's lens' look but then again this is a totally different line of lenses that they are starting to produce aimed at a higher end of the market with performance to match. The look of the lens is kind of similar to the very sleek Zeiss Milvus range of lenses where the lens hood flows seamlessly into the body of the lens. The build quality of this lens is superb with emphasis made on optical excellence. It's made from aluminium alloy and feels very solid and quite heavy at 791g. The rubber focussing ring feels nice and has a really long focus throw meaning you can really 'nail' focus as precisely as possible. However, it does attract a little dust and dirt. Inside the lens are 18 elements in 14 groups, so a very complex construction which justifies the 'Premium' tag for these lenses. There are 2 aspherical, 1 hybrid aspherical, two extra low dispersion and 3 high refractive elements. This all helps minimise distortion and chromatic aberration. It's worth noting that the lens is not weather sealed. This is no big deal to me as I tend not to take my camera out in harsh conditions and would mainly use this lens to shoot interiors and on the odd occasion shoot landscape scenes.

See more about specs in the table below: 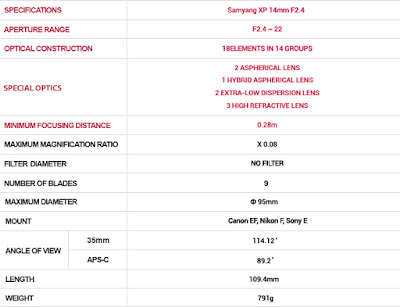 Fixed focal length (Prime) lenses in their nature do tend to be sharper than their variable focal length (zoom) lens counterparts so its no surprise to find that this lens is tack sharp throughout the frame given the amount of glass that goes into the construction of this lens.

During my relatively short time with this lens I've tried to test it out in various locations and situations to showcase the lens' capabilities and have been left impressed time after time at how sharp the images are that it produces throughout the frame and not just the centre. The build quality is solid as it's made from aluminium alloy so you know that this thing is built to last. Distortion and chromatic aberration are kept to an absolute minimum with this lens. The focus ring has a long throw so you can focus precisely on your subject to create killer compositions. A 14mm lens is a focal length I would probably use while shooting restaurant/bar/hotel interiors in my day to day job so yes I would like to have this lens in my bag for times when my 16-35mm just isn't quite wide enough and I know that I will still maintain quality of image. Releasing this line of Premium lenses is a great follow up to introducing autofocusing lenses for the first time in the company's history earlier in the summer and I have no doubt that these lenses are sending Samyang more than a step in the right direction.

The lenses will be globally available in 2016, with suggested retail prices announced at a later date.